“Along with poor electricity generation and an unstable security environment, corruption can be added to the list of things that increase the transaction costs of economic activity” 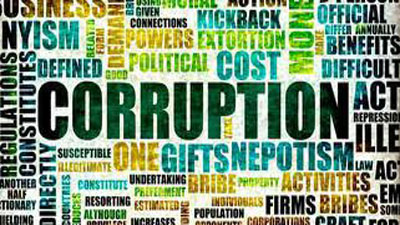 Does corruption affect economic growth? If so, how? Political scientists and economists have been concerned with these questions for decades now. And as is the case with most things these gatherers of ‘data’ study the answer is not straightforward. It depends; sometimes corruption appears to matter to growth and sometimes it does not. But what does that mean?

In the aftermath of Buhari’s ascent to the Nigerian presidency, there appears to be no country on earth more concerned with tackling corruption. Just this morning, President Buhari informed the nation of an ongoing endeavour to pin down the accounts of those in government who are responsible for illegally lifting crude oil and promised their imminent remand in the nation’s courts. If nothing else, over the next 4 years onlookers can be assured that the president, his eventual cabinet, and all Nigerians will be busy ‘tackling corruption’.

It is not just Nigeria. This past Sunday, US President Obama spent a good part of his Kasarani Stadium Speech in Nairobi addressing corruption and what he called “bad traditions” in Kenya. For most people around the world, it would seem that when it comes to ‘Africa’, corruption really must, and does, matter. ‘Africa’, apparently, is a hotbed of corruption. And of course, with the country’s reputation for internet based criminality, it would appear that Nigeria must have the most to worry about.

On the one hand, those such as Howard French are correct when they suggest that in the subjectivity of corruption lies the implausibility of its relevance to the state of Africa’s development in absolute terms. The point is that in continuing to defame the reputation of African countries abroad— in ever insisting that corruption is its perennial problem, those such as President Obama in his speech may be doing more harm than good.

To be sure, it does a great deal of psychological damage to the citizens of African countries and their states to be ever perceived and characterised in this generally negative manner. But surely many of us have become inured to this aspect which the general ignorance about Africa and its multifarious peoples often generates in outsiders.

More directly, however, the insistence that Africa (and Nigeria) is a place where corruption is bred bar none can, and does, affect economic growth and prosperity through its effects on transactions costs. From the work of those such as Douglass North, we know that legal and regulatory stability (or lack thereof) affects a country’s economic performance through how it affects the ability of those doing business to efficiently and effectively calculate the cost to themselves of transacting their business.

Along with poor electricity generation and an unstable security environment, corruption can be added to the list of things that increase the transaction costs of economic activity in Nigeria. In the case where a country’s outside reputation for corrupt practices is so malign, this may very well affect economic behaviour beyond merely its effect on the individual pride of a country’s citizens. Does that mean that people like President Obama should stop telling the world how corrupt African countries are?

Yes and no. Yes, because the dishonesty that is inherent when the corruption that takes place in certain African countries is seized upon with no sense of critical or comparative intention, disproportionately biases both the political and economic global playing field in favour of those countries that simply do their own corruption with silverware.

Indeed, with organizations such as Transparency International keeping tabs on which countries are perceived as “very clean”, its no wonder the rest of us feel so filthy.

Nevertheless, the kind of corruption that is practiced in countries like Nigeria does likely and directly affect economic growth. The fact that both domestic and international doers of business cannot accurately calculate the cost to themselves of doing business in Nigeria from one occasion to the next has the effect of making a community that can be jittery at the best of times even more so. Economic and business activity likes and favours stability.

If we look at the case of the Asian tigers whose remarkable economic development up till the early 1990s is still being explained, we do not see an economic landscape sanitised of corruption. Indeed, as those such as Chalmers Johnson, Meredith Woo-Cummings, and Peter Evans have documented, in countries like Japan, Singapore, South Korea, and Taiwan, economic and political corruption was rife through the entire political and economic systems of these countries.

The difference was that it was a corruption that you could depend on. Officials did not take bribes willy nilly. Business investors could credibly predict when, at what stage, and with whom, corruption was going to take place. In other words, corruption could be calculated and budgeted for; thus stabilising the transaction costs of doing business in these countries.

In Nigeria, this is not the case. Even the ordinary individual can never reliably determine from one day to the next just how many bribes she or he will have to pay between their home and their workplace. For the businessman or woman, this headache of unpredictable corruption is incalculably multiplied. Corruption in Nigeria is erratic and unstable and that is indeed a problem for future economic growth.

If the link between corruption and economic growth and prosperity can reliably be said to be through the mechanism of determining stable transaction costs, it suggests that those to be targeted are not only those high up in government but those also low down in the civil service. From the lowly customs officials to the middling managers of bureaucracy, it is these who are often guilty of inflicting random charges on the purveyors of business and making it difficult for those who would promise us our prosperity to willingly calculate it to be in their interest to do business in Nigeria.

One thought on “Corruption, Transaction Costs, and the Problem of Nigerian Prosperity.”